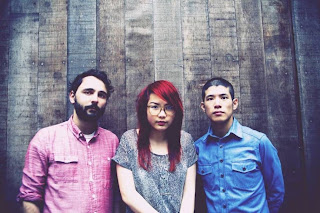 Initially conceived as a solo project by multi-instrumentalist Olivia Lee, the addition of Kellen Balla and Young Lee turned There's Talk into a three-piece. Following on from their first single in May, this week has brought us the release of their debut EP 'Tiny Strands'.

A band combining folk and electronic elements, this is no more apparent than in the opening track (and single) 'The Salt', where the fragility in Olivia's vocals are beautifully accompanied by - to begin with - just the steady and simple steps on a piano. An occasional drumbeat marks each line like a lamenting heartbeat.

And you walked on your own
Heart out... teared.

As we reach the middle, and head towards a beautiful and bitter-sweet ending, further electronic drum loops are added; a mix that could have felt disjointed and too unfamiliar, yet instead manages to sound appropriately thought-provoking.

'Lint And Feather' is perhaps more traditionally folk with a guitar and banjo taking the spots as the key instruments, coupled with soft harmonies throughout the woebegone words.

And I lied to you
And I tried to lose you

Placed at the centre of the EP, 'Hummingbird Place' takes a very defined turn two minutes in. The picks and strums upon the guitar are pushed aside without warning, as synth and drums take over. Even the vocal delivery adjusts, bringing a more serious tone as the final lines reaffirm what the instruments have declared:

Everything changes
In this hummingbird place

Penultimate track 'Slip Light Gold' feels purposely restrained as though the song is tentatively circling, searching for a chance to declare itself, to find the chance to speak up. The music builds through crescendos, only to fade again and give space to the gently haunting voice that inches towards its proclamation. This is a song that tells a story as much through its careful arrangement as its lyrics.

In contrast, the closing track 'Tiny Strands' is a lot more direct in its quest. Lacking the depth of imagery and metaphor that its predecessors explored, the words are quickly clear and all meaning is succintly revealed.

These earnest messages are projected with the movements of a subdued guitar as we reach the climax, where melancholic harmonies of "oohs" and "aahs" create a chilling, and saddening, aural envelope.

This debut EP reaches a hand out to your emotions, beckoning you to take a trip... a trip that may well be sombre and grave, but one that is also breathtaking, moving, and addictive.

"You must pass your days in song. Let your whole life be a song" - Sai Baba