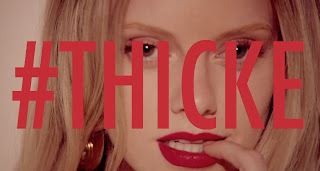 Including hashtags in song lyrics/titles/videos is just blatant commercialism and forced marketing.

The often-derided Justin Bieber added fuel to the fire when his song "#thatpower" was released, which also had Will.i.am's involvement (whose recent album was called "#willpower"), and was certainly considered to be a somewhat tacky attempt to create a buzz. I'm not sure that he was the first to release a song with a hashtag as the title (the most likely contender appears to be Cobra Starship with "#1nite") but he's definitely one of the more well-known. Mariah Carey also jumped on the bandwagon this year with "#beautiful", a hashtag that was always frequently used anyway so may well have been a pointless choice.

Although not quite the same, last year the third album from the band Reverend & The Makers just used there Twitter account name as the title (@Reverend_Makers). Perhaps they just wanted to gain followers, but it could easily be argued that there was more than a little irony present: the band's music often takes shots at modern life and that could well have been just an extension of that.

Personally, I'm not entirely opposed to hashtags appearing in music videos, and people often tweet about particular songs they like or are listening to, so a provided hashtag for uniform use is convenient from a "social media" perspective as well as clearly smart marketing for the record company/artist/etc. I'd definitely welcome it being done in a more subtle manner though. A lot of TV programmes now flash up a hashtag at the start for those people feeling the need to post about it (Have I Got News For You was the first I noticed - #HIGNFY), so something like that seems perfectly fine to me. But many might say that it has become a little gratuitous of late.

Robin Thicke's video for "Blurred Lines" is definitely the current offender, with blatant hashtags throughout the video. Although again, arguably, this is somewhat tongue-in-cheek due to his name surprisingly trending earlier this year when people were comparing his music to a new release from Justin Timberlake: "Suit & Tie". The hashtag inclusion could well be a statement along the lines of, "This time... It is definitely me". And the overblown, full-screen nature of each word may well be laughing at its own presence.

I'm sure if some independent, home-recorded and self-funded artist stuffed a hashtag in their video or title in order to improve their chances at being spotted on social media then the tuts and sighs would be considerably less (although perhaps not entirely absent). But because the likes of Bieber and Will.i.am are already hugely successful and assumed to be wealthy, then their shameless self-promotion is more heavily frowned upon than the likes of Joe Bloggs doing acoustic sets in the local pubs every night in order to sell his record.

However, I have to admit that I do cringe a little whenever I see a song appear with the # in front of it, as it often comes across as purely an attempt to gain further exposure. An attempt that, in most cases, is rarely necessary. Furthermore, giving social media users something pre-defined to group their posts is probably not entirely necessary, as most are savvy enough to form their own just as effectively.

The latest single from Rizzle Kicks includes the line "hashtag trend" slotted within lyrics that take pot shots at the media, and modern consumption of it. In this instance, it is safe to say that the duo included the words as a knowing reference to this recent habit.

Perhaps it is outright, shameless promotion. It's forced, eager, and often smells of desperation, but the hashtag is also the fashion of current social media. Perhaps, given time, its use will die out as more popular sites start up, and those songs that include them will just feel dated. In the meantime, my preference would be that song titles are devoid of the hashtag, and videos keep things low-key.