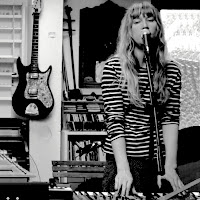 The second in a planned series of six EPs, 'Creature' follows on from its predecessor 'Sybil of Delphi' and provides the next songs from singer songwriter Minko. Initially exploring electronic music production, she decided a change was in order and moved from the hustle and bustle of London to the relative peace and quiet of Cornwall, where she surrounded herself with acoustic instruments and began to write and record. Over fifty songs were created, and 'Creature' is the collection of songs 5 to 8.

The opening title track is a live recording, featuring Steven Havenhand (late 80's Pulp guitarist) and Nick Duffy (The Lilac Time joint-founder) who provide assistance with guitars. Minko's layered vocals create a wide, spacious sound over the strums and picks, and is particularly enjoyable and evocative during the stretched interjections between verses.

Once the waltzing rhythm begins playing on the Fender Rhodes organ, the second track's title - 'Monsieur Zola's Amazing Carousel' - makes perfect sense: the melodica's involvement only serving to enhance the fairground-esque sound. Lyrically the song discusses how, in modern life, perhaps we have lost sight of life's meaning and have forgotten the many great steps and achievements that have brought us to where we are today. Name-dropping past philosphers, poets and writers, we are brought to the final lines which bring together the words and music beautifully:

"If 'the child is father of the man',
What would our ancestors say?
If Freud and Buddha sat together on the merry-go-round
And put the brakes on today?"

By contrast, third track 'Child Of Four' is lyrically sparse, but is no less indicative of Minko's often-haunting arrangements. The plink-plunk of the kalimba may continue the sense of innocence that the title suggests, but the rest of the instruments are more concerned with evoking a constant, but subtle, melancholy through a steady stream of repetition. Despite this, the song holds interest throughout until a thumb flicks the final note.

'The Owl Song' finishes the EP mostly as an instrumental, with Minko's voice present in just a few words and "da-da-da"s, but a story is still told nevertheless.

Compared to the previous release, 'Creature' is a darker collection of songs that sounds like it has been carefully nurtured amongst a broad range of musical influences. With her captivating voice and obvious skill at combining instruments to compliment her desired theme, Minko has brought us a mesmerising record.

"All music is folk music. I ain't never heard a horse sing a song." - Louis Armstrong
Posted by Hobbes at 22:29