Alisha's Attic - Stay Will U Stay 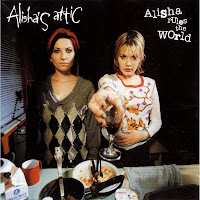 Comprised of sisters Karen and Shelly Poole, Alisha's Attic were probably one of the first groups that I ever truly embraced: actively searching for all their singles, and repeatedly listening to their music. Their 1996 debut, 'Alisha Rules The World', is still one of my favourite albums and I continue to play it regularly (and not just as a nostalgic attempt to remember when I was a teenager). Soon after their third album in 2001, 'The House We Built', they were sadly dropped by Mercury Records and the duo ceased recording together.

Four years later, I discovered that a fourth self-produced album had been made available by the girls. 'The Attic Vaults 1' (a 'Vaults 2' was apparently planned) was a collection of previously unreleased songs that had never made it onto their previous albums, and so the tracks were put together as a final thank-you to their fans. Needless to say, I bought a copy as quickly as possible and soaked up the "new" music.

The penultimate tune, 'Stay Will U Stay', is the stand-out track for me and definitely deserved to have reached a wider audience, although it is difficult to find a place for it amongst the songs on their three albums. With just piano accompanying the sisters' always-beautiful harmonies, the track feels stripped back and raw, a sound that is complemented fully by the sincere lyrics. Perhaps if it had been included on a previous release then further instrumentation may have been added during production, but I am glad that it has remained as it is: a tender, gorgeous reminder of what Karen and Shelly Poole achieved together.

As with Nik Kershaw's 'So Quiet', 'Stay Will U Stay' is on the list of music I intend to transcribe into a piano score one day.

Since Alisha's Attic, both of the sisters have remained in the music industry: Karen has successfully written for many other musicians whilst Shelly has also continued to record, both as a solo artist and in current band Red Sky July.

"Songwriting's a weird game" - Keith Richards
Posted by Hobbes at 13:32