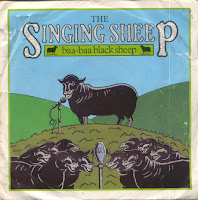 When Richard Branson's Virgin Records made its first fortune with the million-selling 'Tubular Bells' from Mike Oldfield, the opportunities for the next step must have been countless, astonishing, heaven-sent...

The company was still seen as being too small compared to the big names, so signing other groups was proving difficult.

Fortunately for my childhood, Branson made an interesting decision when his auntie, Claire Hoare, told him about the singing talents of one of her sheep. A crew of sound engineers went sent to her flock in Norfolk, and began recording the sheep in question - plus a collection of other farmyard animals.

Via the wonders of 80's technology, the baas, clucks, quacks, and moos were pitch-altered and spliced together to form a single that was released just in time for Christmas: "Baa-Baa Black Sheep". Beginning as just an ovine version of the nursery-rhyme, it follows a chicken-based crescendo with the inclusion of drums and synth and then, obviously, throws in a portion of Tchaikovsky's '1812 Overture' for good measure.

Oh, and the B-side? "Flock Around The Clock"

When the record was released in 1982, I was still three months away from being born. However, it somehow avoided being thrown out once the novelty had worn off, and so I had the pleasure of listening to it many times during my early years. I recall at least one member of my family finding the song "a little creepy".

I still own the record which remains in surprisingly good condition, especially considering my clumsy ways with the record player's stylus when I was a kid. Sadly I no longer have a turntable on which to play it, but YouTube (as always) provides the audio of my past.